This morning I’d just come in off of the front porch from a great conversation about nature and found a tweet from City Stages, our local music festival in my Twitter streams. For the sake of those of you that are not completely sure what Twitter is or what it does, a video for you to watch before we continue. I’ll wait…

BTW: we’re hoping to reach the 400 follower mark in one week from today!! can you help us out?

The tweet becomes an interesting conversation starter, as I decided (after retweeting from both accounts mind you) to ask the following question:

Question gang… Is it more about numbers (or followers) or the level of interaction? Discuss…

I was about to set out here to share examples of what people were saying in response. I’ll probably still do so later on today. My objective changed when I noticed that Amber Naslund has made this challenge earlier in the morning via Twitter:

My challenge to you: instead of blogging about how to use Twitter, blog about how you used Twitter to make your business better.

The answers given to my original question are important, but I figured sharing my experience and hearing from others may be a better way of looking at it. 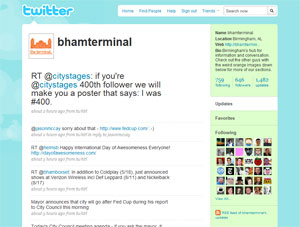 I first signed my hyperlocal blog The Terminal up for Twitter last spring, after getting a personal account to use at the BlogWorld Expo in late 2007. Beginning in June, I started to track any increases or decreases in followers. It’s gone from 181 profiles following in June (I won’t say people since I’m aware of  folks managing multiple accounts – including me) to 645 followers as of 11:30 a.m. today. I try to follow as many of them back as I can.

I’m sure that sorting through that list to determine active accounts would bring the total down. I may even lose some as a result of this post…

But what does that number mean to me? Why is it so important to follow back and talk with them? It means that I get to engage with people who truly care about the site and what it does, even though some of them have never met me in person, unless they’ve shown up to one of our Tweetups. I’ve received tips for breaking news stories. I’ve been able to share great news and help other publications get their message out. Last night I was even able to post a photo gallery from a follower who simply sent us a DM asking if I’d be willing to post her photos.

Getting numbers may be important, but it is equally important to engage them in a way that lets them know that they mean more to you than just stats that can be plotted on a graph. The quality of the relationships that you can build with these tools that are available to us are more important that demonstrating that you have followers.

I’m not worried about City Stages as far as that goes – the person handling their account enjoys the interaction.

The thing is, for some folks, the numbers are still necessary to provide the primary case for advertising and establishing a value. The questions are already out there about whether that will be sustainable long term.

But what’s your story? How have you used Twitter to make your business or organization better? Or how can you if you haven’t yet?