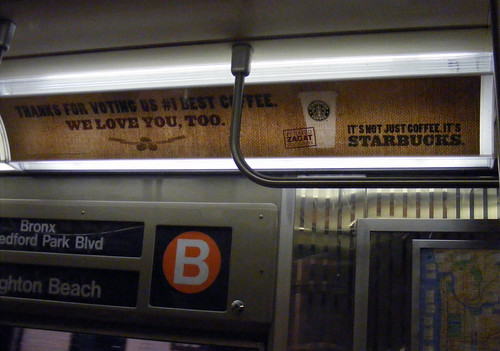 I rode down to the last day of Affiliate Summit East on the B train – the local – and got a lesson in web etiquette in print form.

One of the things that New York’s transit authority – and other transit agencies – have gotten great at doing is selling all of the ad spaces available in a rail car to a single company (even if ad revenue has gone down in recent months). It probably seen as a great way to reinforce brand awareness by larger companies and organizations, especially if you’re averaging a couple million folks riding the system & seeing it every day.

This morning, my friend Brett and I ended up in a car that had advertising from Starbucks Coffee. It was extremely successful in doing one thing using print media that businesses using various social media tools seem to forget to do: saying “thank you.”

The entire car was covered with signs that thanked those folks who run in every morning and grab their cup of coffee from this entity for voting them #1. If you got on the train at Fordham Road and were on it until you got to Rockefeller Center, at some point you read a huge “thank you” card from a company to it’s fans for voting them #1. Some folks are calling it gloating, but businesses, as well as individuals – large and small, on Main Street or via their online presence – would be wise to take this page out of Starbucks’ playbook. There’s something about being thanked by someone or something. You feel as though you matter as an individual and that a company or a service is aware of how they got into that position.

…and thank you for reading!

Photo: Starbucks ad on the “B” train. acnatta/Flickr.