Home Urban landscapes On the banks of Times Square…

It’s been one of the most talked about urban experiments in recent memory – in a city that enjoys to try new things out from time to time. Times Square‘s conversion into what most of the world would consider a real pedestrian friendly zone was something that I’d wanted to check out since I’d heard about it. I still wasn’t quite sure what to expect though… 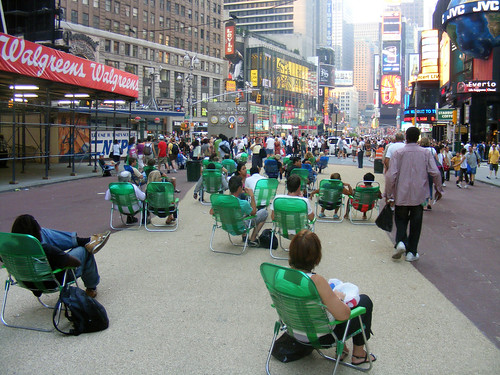 As some have already stated, pedestrians have become the attraction in the newest show on Broadway. It is much more of an Italian piazza now, only with asphalt tinted to look like sand in one location, beach chairs and a sea of humanity to look out onto. Actually, there are a few folks that would probably think of it as more of a trip to the beach – a crowded one at that.

The folks at the TKTS structure probably have the best view of the result actually – a chance for folks to finally get a closer look at the space around them. Visitors to Times Square can finally pay attention to the details of the entry to the Paramount Theatre or spend a little more time staring at the ticker without worrying (as much) about being bowled over by the masses. New Yorkers have been slowed down in a city where for many the stereotype’s been about rushing from one place to the next.

It’s important to recognize the fact that the project is being treated as though it’s a European square and not as a pedestrian mall, though there are some that will still try to see it that way. Pedestrian malls are seen by many as ways to move people through a space to get to and from stores and businesses, often with little activity going on outside. Piazzas can be the center of life for a community and what better place to have a piazza than at the Crossroads of the World (and yes, I know about the mall with that name out West). New York seems to have taken it one step further and turned it into an urban escape from the concrete jungle – one that gets lost on most people as they seem to be more concerned with the design of the permanent furniture than the transient nature of the crowds and the signage.

One of the things that I thought about as I looked across the mass gathering of people was just how this public project would affect the venue that had recently once again become a central gathering place for people – Bryant Park.

The spaces are quite different, especially when you think about what’s on display and how they’re to be viewed. For years, Times Square has symbolized the glitz and glamor of a city that never sleeps, both as a destination that embraced ill repute and family friendly activities as various points and time in its history. Bryant Park was also not necessarily a space that welcomed people, though it has now seen made-for-TV concerts, fashion shows and ice skating.

One could say that while New York’s newest urban space is based upon active engagement, Bryant Park is more about relaxation and escapism. The evening I visited recently, hundreds of residents were gathered to watch The Magnificent Seven . There were also chess games, ping-pong, laptops humming along and people just enjoying the outdoors – a warmer version of what I’d just seen in December when the ice skating rink was the featured attraction. People were being people – more relaxed and at ease as they waited for dusk and the start of their mental vacations.

I’m not quite sure I like one option more than the other. Which one makes sense to you? Or does either option even sound interesting?