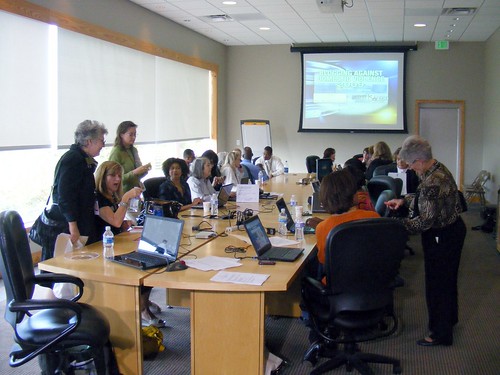 Maybe this is one example of what collaboration is supposed to look and sound like?

The sounds of fingers hitting keys on laptops filled the large conference room in the NBC 13 studios high atop Red Mountain in Birmingham, AL on October 7. The city’s statue of Vulcan stood outside bathed in a sea of pink in honor of Breast Cancer Awareness Month. Inside, bloggers from across the region had the opportunity to interview experts and community leaders while participating in a blog-a-thon focused on an issue that may not get as much visible exposure this month – domestic violence. This is despite national initiatives and a Presidential proclamation.

It was definitely not your typical blog-a-thon. For those of us who’ve participated in this kind of virtual event before, it’s an opportunity to raise awareness about a given issue by dedicating space on your site. This donation of time, space and opinion normally take very different forms as participants are not necessarily exposed to the same resources or at the same level of being able to use the tools available. You basically don’t participate if you’re only looking to increase traffic to your site as that is not something that is guaranteed, though it is possible. What Blogging Against Violence attempted to do was see what happens when you try to provide ways for anyone that wants to participate in that event to have access to the same wide range of tools and resources.

Conversations with those that participated in the event (which actually continues online until October 15 – incidentally Blog Action Day) should lead those interested in doing a similar project to believe that it can be successful. Bloggers feel as though they have a chance to produce a piece of work that they may not normally have the ability to because of the resources provided by the organizers. Organizers are pleased with the chance to provide an opportunity for the facts to be presented to bloggers to share with their readership. The use of the hashtag #wfundbham by the bloggers and supporters led to use and exposure by folks in New York and Wisconsin of things being done in their communities.

It may not have led to an immediate increase in donations (which people are able to make at any time), but it did increase its exposure and people’s awareness about the issue, both helpful when asks are made in the future.

It also provided a chance for folks that know of each other only virtually to at least be in the same room and feed off of each person’s energy, no doubt leading to potentially more partnerships and collaborative efforts later on.

While we’d be providing different points of view we’d be speaking in one voice. If that’s the case, Sam Davidson’s observations on collaboration could be applied not just to nonprofits and churches but all forms of for profits ventures and city governments.

Just think of the changes that could come from such a change in mindset.

I’m optimistic that we’ll get a chance to do it again very soon and that we’ll be able to get more folks to participate and help spread the word. It’d be nice to hear from you of any other examples that may be out there of similar collaborative efforts…