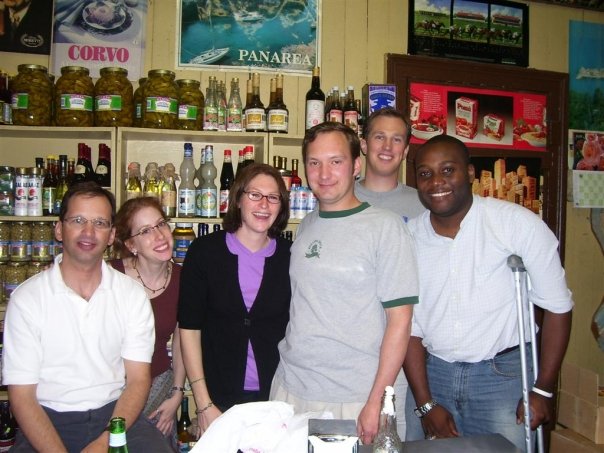 What memories do you have etched into your mind from a conference?

This photo is from my second Main Streets Conference in New Orleans in 2006 after some friends and I finished having some lunch at Central Grocery. There’s also a story about a streetcar and a very long trip to a cemetery, but I digress…

My first one was in Baltimore, MD in 2005 and I have several fond memories from it. None of them would have never happened had I not physically been there.

Here’s one example: I was set to go to one of the last sessions on Tuesday afternoon when six of us decided that we’d skip out and check out one of the city’s municipal markets for some oysters. We ended up spending two hours talking about preservation, revitalization and everything else under the sun. Being able to hang out and talk with these guys, including Billy Parrish (a former National Trust Main Street Center director) and economic development consultant Don Rypkema was the highlight of my conference.

I would have never gotten that from just following the conference online. While one can occasionally find those types of conversations and opportunities, they are rare.

That’s why I’m exploring Nashville as you’re reading this on Friday evening getting ready to attend what promises to be a great open to the public session at the National Preservation Conference (and I haven’t even talked about getting to hang out with Jason Falls, Chris Brogan and Rachel Luxemburg at Daquiri Island during BlogWorld Expo 2007…).

Wednesday’s post about virtual conferences led to a few online and, ironically, off-line conversations about the benefits and pitfalls associated with it. This included one from a friend via Facebook that asked about what happens when you give away too much online.

“…nonprofits need a revenue stream from somewhere and conferences, while very time- and money-intensive, do generate revenue. If enough content is put online, how do attendees justify paying to register? At what point do they stay home and be virtual attendees for free?”

It’s become common to be able to find and expect some kind of an opportunity to take part in conferences virtually, most likely via following along on Twitter or hoping for a live stream of a keynote or two. Even with that expectation, many would still choose to attend in person if at all possible.

Last night, I got a chance to watch the happenings at another conference via mycontent.com (great site BTW) – this year’s BlogWorld Expo in Las Vegas. I was reminded of one valuable piece of advice during Chris Brogan’s keynote…

(The link goes to Chris’ blog post about it. Great reading…)

I’ll put it this way: it doesn’t make any sense to hide behind the keyboard and only glean from the streaming video and Tweets – and that goes double if you’re there in person.

BTW, I probably just spoke to myself as much as I tried to pass along Chris’ advice to you in my own voice.

We need the chance to enjoy chance conversations, fleets of fancy and rainbows. For that reason alone there will always be a draw to attend a conference in person. There’s something about sitting in the Ryman in Nashville or hanging out at the Daiquiri Island in  the mall at the Planet Hollywood Hotel or sitting at a coffee shop and being able to actually talk to someone one-on-one that just doesn’t happen any other way.

Social media in this case is a window that lets us catch a glimpse of what’s going on (and what we may feel we’re missing out on) elsewhere in your community. It’s still only a glimpse.

You need to be able to hold onto those memories and cherish the communities of which you’re a part. The tools are there to help make it easier. Hopefully we’ll have some great conversations soon about how to do that – both on and off-line.