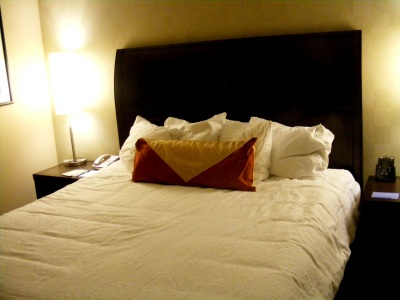 While I was in Nashville, I spent the Friday night at the new Hilton Garden Inn in Cool Springs (so new that it was barely open two weeks when I checked in).

The room was comfortable, the front desk was extremely helpful and the breakfast attendants talked me into a full breakfast that was so good that it kept me satisfied practically all day Saturday.

Plus, it was one really comfortable bed (as you can see)…

While I was driving back, I couldn’t think of many things that could have made the stay even better – save one that would be a perk.

I thought about what it would be like if you were able to communicate with a hotel or inn directly using social media.

Hotels are already looking to tools like Twitter and Facebook to reach out to those of us out here in the virtual universe, but the tone of the conversation would need to be altered slightly.

Followers are currently able to find out about contests (that chains hope become viral – like the one that David Sullivan just won) or about special deals that are only they will be able to learn about. I’m hoping that eventually it will also make it possible for me to communicate with the desk about availability (if I’m a regular or business traveler) or be able to request the hotel shuttle come and pick me up in addition to helping with recommendations.

It wouldn’t be fair to ask for a change without pointing out the personal touches that using social media and search allows one Garden Court Inn to provide (thanks for the link, @SocialMediaComm).

Putting this question out via Twitter today pointed me in the direction of several sites that use that popular service to share information with their followers – but it is still in the early adoption stages as is all of this stuff. My adopted hometown of Savannah has a couple of entries in the race, including a profile for the DeSoto Hilton, the city’s tallest building, as well as the Hyatt along the waterfront. There are also several hotels using Facebook, including aloft, Hilton Garden Inn and Sheraton Hotels and Resorts among others, though many appear to be using as a broadcast vehicle and not necessarily one that builds relationships over the long term via a two-way conversation.

One reason to be optimistic about that interaction changing is Hyatt’s HyattConcierge account on Twitter. The profile has more than 7,800 followers and a quick look at recent tweets from it shows that it’s responding to people while making others aware of answers to questions that they may have. It also appears as though they probably have as much traffic occurring as direct messages to travelers as the open information stream. It’s just cool to think about what it would be like if several properties could get to that level of assistance for their guests.

A few things will need to change in order for this to spread across the industry. The accounts would need to be used by more than just  the marketing department. I know that managers are always worried about how their staff uses their time (I know I was when I managed), but the ability to have folks able to receive answers to questions like “What’s going on in town this weekend?” or “Is it possible to make reservations at (insert name of restaurant here)?” would be a treat for those following and probably a lot more fun for your front desk and concierge staff than you think.

Another issue involves getting that conversation online to be a two-way one and not just one of giveaways and contests. This would involve both sides of that conversation taking steps to truly change their behavior, including having questions asked and answered by other guests. That may take a little longer, but I still think that the results would be great.

I’d love have some of you share more examples of hotels and smaller properties using social media tools to enhance the guest’s stay.