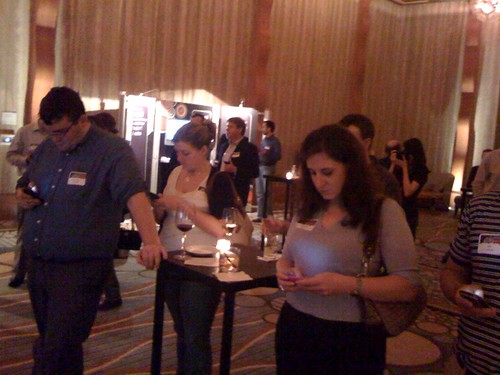 Last night was the first Opera Birmingham performance on the Samford University campus in almost 15 years. It was also the first time that I realized how dependent someone can become on mobile devices to serve as an instant connection to virtual company.

How do you connect with others in an unfamiliar place?

This is not to say that the performance of Aida was not breathtaking and enjoyable – it was both. I eventually even got into a conversation with the older woman sitting next to me about what my favorite opera was and why I was there by myself. I wasn’t actually there by myself – Betsy’s parents were somewhere near Row E; I just happened to end up with a ticket in row W.

During the intermission I saw people in the performance space that I knew but that didn’t exactly recognize me sitting in a shirt and tie – not to mention the fact that they were in their own worlds. It’s something that’s completely understandable – especially when you realize that “all the world’s a stage” (blame one of my professors in college for my accepting that truth in this context).

This meant that with the exception of the one conversation with the woman sitting next to me during the second intermission, I had no one to talk to about the performance – or anything else.

Then I pulled out the relatively new phone (yes, a Palm Pre that I still need to finish writing a review of soon) and I suddenly realized the benefit of having a gateway to the world that could fit in the palm of your hand.

The periods when the space was not filled with melodious sounds and capturing my attention I was checking emails and sending birthday text messages. I even took a couple of notes for this post – including the fact that there was a couple about three rows back who were each on their iPhone playing games and sending out tweets (and they were there together).

I learned a long time ago that you can feel like you’re by yourself even when you’re surrounded by a rather large crowd of people. A web-enabled phone allows me to have a safety-valve available for when I begin to feel that way. These folks have chosen to “follow” me or be my friend meaning most times someone is there listening to what I’m saying or willing to answer the question I’ve posted. You hope that’s the case at least.

Does it always work out as you hope? Probably not; I’m sitting at the opera trying to pick Betsy out from the back of the space with blurred vision while another friend is sitting in a bar in Philadelphia celebrating her birthday. The odds of finding some common topics get tough but the mere fact that the opportunity exists is quite important.

This new approach to the window to the rest of the world may mean that most of your friends may not live in the same city as you. It can also mean that some of these social events could lose their luster if you’re not necessarily doing that offline networking since you’re glued to your personal screen.

It could also mean that there are people who claim they are your friends for the sole purpose of keeping tabs on you who may never engage. Once you reach that level it becomes an issue of figuring exactly what it means when you call someone a friend. I will say that I’m starting to examine that issue myself right now.

The important thing was that at least for a few moments between acts, I felt connected and like somebody felt like listening.

I guess the question remains after all of this:

How do you connect?

Photo: Tweeting the What is Social CRM? 140 char answer at #soccrm | the_rab/Flickr