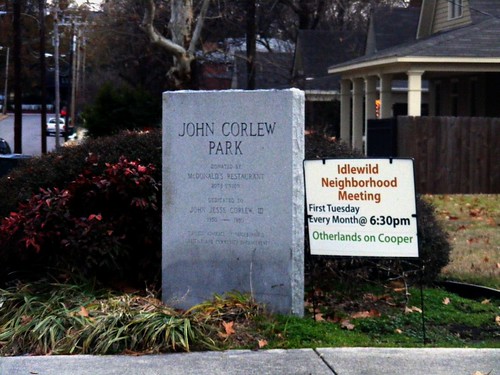 During a recent trip to Memphis, TN, I stumbled across the sign that you’re seeing to your left if you’re visiting the site. Seeing it brought a smile to my face and made me wonder if some folks have become too dependent on digital reminders and flashy commercials to get a message across.

The neighborhood I currently live in has had a few recent issues come up that folks felt residents should have been aware of immediately. While I’ve had a chance to meet people who live nearby, I didn’t get the opportunity to meet those living adjacent to me until all of us had been visited by some neighbors that were more interested in breaking into our homes than in conversation.

I’m grateful for knowing my neighbors (at least enough to wave and take over mail that’s been delivered to the wrong house), but I long for an opportunity similar to that of Kim Severson when she first arrived in the South. As people continue to feel free to move around the country, it’s tougher at times to know exactly how to plug in. It also makes it difficult at times to truly gauge public sentiment on any local issue.

It was a little easier here in Birmingham years ago when they mailed neighborhood meeting notices to residences at least quarterly. Now that it’s not currently feasible to do that, it’s tougher to know exactly what’s going on. Some folks don’t even want to know (though they should care, right?).

Signs still serve a purpose, even if it’s to drive people to a digital outpost to get that information. I’m sure that stickers would work too, but signs truly say something.

They can still be your first line of offense when attempting to make sure folks are “in the know” about community happenings. They’re hard to miss most times and they’re able to go a lot more places than you think.

Sometimes we forget just how much power a simple sign has over those who drive past it. Thankfully, there are those who still recognize and respect that power.

As we rush to save money and make it “easier” to get the word out, it may not hurt to remember that not everyone’s über-connected. Even if they are, they may appreciate the effort to help remind them to unplug every once in a while.

Do you still think that signs serve a necessary purpose?