Home Observations Incentivizing the future of our communities 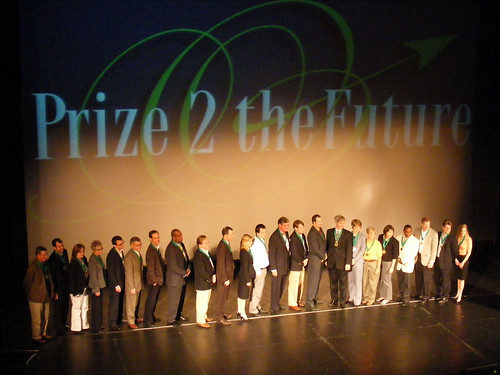 The evening of May 5, 2011 saw approximately 600 people gather at the Alabama Theatre to learn who won the first ever Prize2The Future idea competition. It was the result of conversations held in metro Birmingham between the Community Foundation of Greater Birmingham and the areas that they serve.

They asked people to share their ideas for a piece of property one block in size currently serving as a municipal parking lot. As I recently wrote in a column for B-Metro Magazine, while idea competitions aren’t new, the idea of it being open to everyone and not necessarily being design-driven is.

It led to more than 1,100 idea online submissions from across the United States and thirty countries. It also allowed the city to realize that it could continue to dream. The top 10 ideas are currently available for review at the competition’s official website. The photo above shows members of the ten teams on stage earlier in the evening.

One of the individuals in attendance at the announcement was Anil Rathi, CEO of Idea Crossing. The company’s primary focus is helping administer competition (as was the case with this one – using the company’s Skild platform). It was founded in 2002 in Culver City, CA.

Rathi talked with me for a few moments after the winner was announced about the significance of the lessons learned from this particular competition:

It’s long been an issue among those in the various fields associated with economic development – how do you get buy-in from the community and motivate them to imagine what is possible? Perhaps incentivizing as a way to seed the process is the way to go. It’s not like it hasn’t been tried before.

While living in Savannah, I took part in a project that also used prizes as an incentive. The Memorial Health Feel Better Challenge (it’s web presence has disappeared) attempted to motivate citizens in the Coastal Empire to take better care of themselves. I personally lost 40 pounds and started regularly biking and meditating. I realized about 3 months in that while I still checked in at Savannah Mall and the official website, it became less about the incentive and more about the routine.

Perhaps that will be the result of the continued execution of this competition; an opportunity to cultivate a city to focus more on ideas and action than waiting for someone else to come in and do it for them. If providing a cash incentive will help move communities forward, it may be time to see just how great of a transformation it could spark.

So what do you think about the idea of prizes encouraging grassroots community engagement?