It’s safe to say this month’s Carnival of Journalism entry is beyond late. It’s so late in fact that the roundup post is already finished and available to review. My original post was finished, links inserted and ready to auto-post. Something told me last-minute to scrap it and start from scratch (meaning that it finally sees the light of day late Monday morning). I’d apologize, but that would break the first rule of #jcarn… 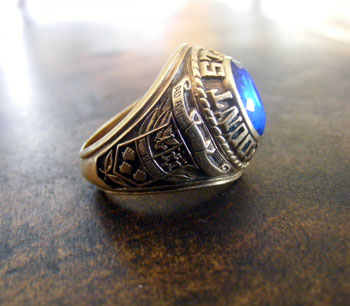 There are many people who question why I still wear it all these years later. Well, it’s an important part of how I deal with failure.

I attended Mount St. Michael Academy in The Bronx, located on border between New York City and Mount Vernon. Our Wikipedia entry highlights just a few of our notable alumni, all focused on serving as leaders in our communities.

The ring’s enduring message is simple but powerful. The left side is engraved with an image of the campus’ main building, its tower separating the year. The right side contains the school’s seal and the Latin phrase, “Ad Astra Per Aspera” above it.

Ad Astra Per Aspera. We’ve long been told to translate it as To The Stars through Difficulties. I’m confident if George Pitula ever sees this he’ll know that I’ve retained something from Latin class.

We were taught that failure never actually existed; it was only a difficulty that caused us to stumble on the long road to greatness. Looking back it was great advice. It’s easier to accept defeat if you know that you’ll live to see another day and apply those lessons learned.

The last several months have been extremely hard financially. That fact’s made it tougher to focus on the few projects I’ve been given the opportunity to go after, leading to digging a deeper and deeper hole I’ve got to eventually get out. It makes no sense to blame someone else if you’re the one who can’t dig out of the doldrums. A quick glance at current headlines makes me aware of how grateful I should be right now (though I’d rather feel more useful in efforts to make victim’s lives easier).

It does help if you don’t let others place their expectations for happiness on you.

I’d say my biggest failure in recent months is letting others define failure for me (and what success as well). I think it’s still safe to say I believe that folks never really fail – they just get a chance to learn a valuable lesson for their next challenge. It helps if you don’t put yourself in a situation where folks like to point fingers and assign blame. It helps more when you realize that you can accept blame yourself without feeling as though it makes you weak. I think it makes you human.

I didn’t jump from a dream job to make millions – I did it to try to make a difference in a way that wasn’t necessarily being explored at the time. I haven’t been able to get to sleep easily most evenings. I’m aware that when focused, I’ve been able to help shape a conversation, leading to those few hours nightly being at least a little peaceful.

I’ve traveled to San Francisco, Denver, Seattle, Philadelphia and Chicago getting chances to learn from some of the best in journalism and technology never quite knowing how I’d end up pulling it off, but doing so in the end. I’ve broken bread with people over the last four years I never thought I’d meet much less have a chance to learn from in person.

It has not killed me, though the gray hairs have started coming in much faster than I’d like.

I’d love to not always be stressed about paying the bills, but sometimes it’s better to put my head down and work through difficulties, aiming for the stars.