Sherman Dean’s been pretty busy on YouTube recently. Well, in the eyes of Hiram College prospective students and alumni at least.

The home of the Terriers is still best known for educating James A. Garfield, the 20th President of the United States. Yankees fans of a certain era that followed the team on television would argue that Bill White is probably up there in importance as well. 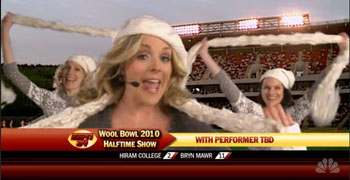 Last week during the 30 Rock season finale, the college was referenced ever so briefly in a flashback sequence involving Jenna, Bryn Mawr College and football. Folks raised in or around Ohio, Hiram alumni and Bryn Mawr alumnae (yes, I said alumnae) got the joke immediately.

How do you respond to getting mentioned on a top ranked television show? You set the record straight using YouTube, that’s how…

The college mentioned the pop culture reference via their website’s news section the following day. They then enlisted the help of Dean, their director of admissions, to record a video explaining exactly what happened when the Terriers met the Owls on the gridiron.

They posted what follows below on its own page – on the college’s official website.

It’s not the first time he’s had a chance to have some fun online either. Dean recently asked prospective students to “Be a Terrier” and remind several of us that it’s been a while since we’ve heard from The Old Spice Guy:

Prospective students got a chance to watch their potential home for the next four years have some fun while laughing at and with itself. Alumni got a chance to connect with old friends online while sharing it hoping to show how cool it was to go there. It probably says a lot for the campus atmosphere too. Those are all important things to consider when attempting to get those students to either commit to attending or supporting future improvements after they’ve moved on – a type of unmeasurable ROI if you will.

Hiram already has its own in-house production group, Terrier Productions, complete with their own YouTube channel. Posting videos like these on an official school channel instead also makes it easier for folks to find them when beginning that online search.