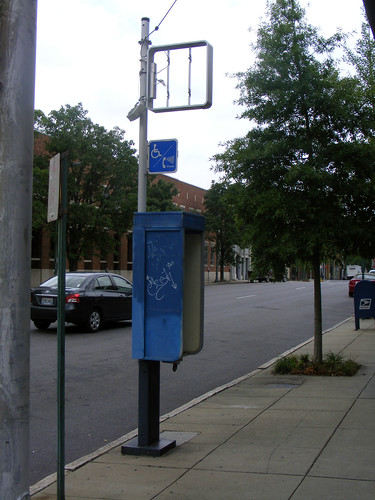 They aren’t as prominent as they used to be on city street corners or service station lots. Supposedly there are only four left in all of Manhattan. I’ve seen few if any at all locally with phones still inside of them – but the wiring is still visible. That means it’s still possible to run new fiber optic lines to them. It also means there’s potentially new life for these once important pieces of street furniture.

Fans of Doctor Who may want every phone booth still in existence to function like a TARDIS, but it’s more likely that you can convert these them into a new tool for communication and engagement.

Many clamor that we’re in the midst of the true Digital Age and the future’s mobile. When approximately 77% of the world’s population own a mobile phone, it’s a great opportunity for someone to figure out exactly how to effectively reach people using mobile. That’s of course assuming that everyone is comfortable using mobile. Maybe part of the short term solution is to continue providing several options to those looking for the information.

Many of the suggested new uses of these machines already out there don’t necessarily have much to do with their original function – a way to reach out and touch someone. The crazy thing is they could still fill this function – with a little imagination.

Riffing off of the digital newspaper box dreamed up a few years ago by The Birmingham News‘ Scott Walker, it probably wouldn’t be that hard to create a shatterproof screen that enables folks to check out current headlines and allow you to report issues to your local government, either directly or through a service like SeeClickFix. It would sit on the back “wall” of the enclosure. leaving space for those who may need to pay for a quick recharging of their phone or tablet. Those users who have WiFi enabled devices but don’t pay for 3G or 4G data service plans could also pay for the ability to download the latest news stories from local and national sources.

Many of these phone booths could also serve as housing for wireless routers, allowing for street-level access for those using laptops, tablets and smartphones a way to hop online for a moment.

There are other possibilities for them to play a complimentary role to other services. Those booths located near or at existing bus stops could be converted to provide additional information about where the bus was, when it would arrive and current weather conditions in different parts of the city. Some cities could turn them into interactive kiosks located near areas of heavy foot traffic.

For some reason I’ve had this stuff stuck in my head since returning from Hardly Strictly Young last month. I guess it only took a month to finally come up with a recommendation that seems plausible to implement. If a corporation were willing to partner, it would allow for a community to have unfettered access to information and have it reasonably available in digital format for all. It also turns the phone or media companies operating these units into good corporate citizens, helping increase the social value of the community.

Who doesn’t want that when it’s all said and done. Seems like the Doctor Who fans would get their wish in the end – an opportunity to travel through space and time available just down the block from them.

So what do you think? Any other suggestions? Could this even work?