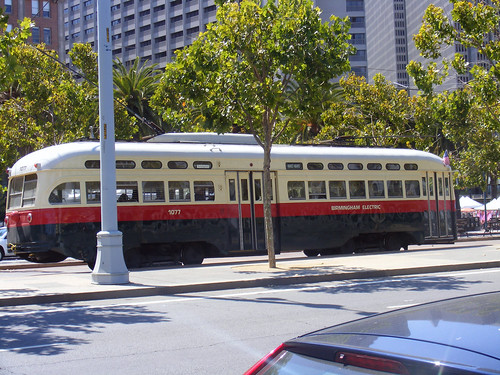 One of the biggest joys of my life was visiting San Fransisco for WordCamp in 2008. Part of the trip led me to walking alongside The Embarcadero watching vintage streetcars rumble by.

The one pictured off to your left was one I took great delight in capturing on film. It’s a fully functioning piece of rolling stock representative of what was once part of the world’s second largest streetcar system – in Birmingham, AL.

You’d find it hard to believe that Alabama’s Magic City could once claim that title nowadays. One part of the problem is evident as you realize that even some of the simplest errands in the world contain the words “get in the car” and “once you get off the Interstate…” The number of tweets and status updates possible because of bumper-to-bumper traffic during rush hour also wouldn’t help those who’d say it wasn’t true.

It’s probably safe to say that “white flight” was a major cause of the exodus of neighborhood stores – it’s a little tough to serve a neighborhood when the inhabitants keep on leaving. The exodus also led to the slow disassembly of the network. The turbulent and violent episodes related to transit during the 1960s (and before) in the city rightly left many uncomfortable riding the bus system that was left behind after the streetcars were retired – and all of the subsequent systems that have attempted to fill a gap.

I’d argue that the future of transit in Birmingham, AL – and everywhere else that views effective, sustainable transportation options as a major issue as we continue through the first half of the 21st century – is tied to the issue of walkability.

The second time Betsy and I visited New York City, it was around Thanksgiving 2006. We’d spent a lot of time in the car so we looked forward to some time off the road.

We took the A train to Cathedral Parkway (110th Street) and walked over to the station’s namesake, the Cathedral of St. John the Divine. Apparently by the time we’d finished walking, we were down by Madison Square (for those not familiar with the city, that’s around 23rd Street – though Bets swears we got down to 14th Street).

We didn’t necessarily walk straight through – we did stop for lunch (and did way too much window shopping and staring up at buildings). The one thing we did know though was if we got too tired to keep going at any point during the day, we could hop on a bus or train and get back uptown.

There will be some in Birmingham that’ll suggest I can’t compare what’s available in New York to what’s possible there. This is where I would remind them the city used to host one of the world’s largest systems…

People I talk to about the issue in general (regardless of city) seem to focus on long-distance transit – something that I think would do more to help remove obstacles in seeing additional acceptance of digital media consumption due to the potential length of the trip more than anything else – instead of the short trips that make up a significant amount of travel on most systems.

Walkable communities tend to give people a reason to be far enough from their car to consider hopping on the bus/streetcar/rail to get back into town. I’d also suggest it would encourage more businesses to consider setting up shop and building new homes within the city limits. You might even see some of those not so good rankings for the city insofar as health issues go drop – significantly.

This isn’t to suggest that a reworking of a system must happen before or after such a movement would be undertaken; it most likely has to happen at the same time. Developers will want to see evidence their investment into the future of the metro area’s core is worth it. Transit advocates would have to remind critics that the problems that currently exist didn’t suddenly manifest and it’ll take time to see long-term results. It’s not like local-based developers haven’t already seen the benefits elsewhere. 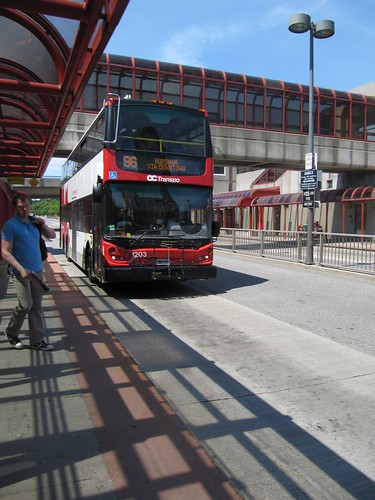 My favorite example of a system that works (or one that I remember working) is located in Ottawa, Ontario. Built primarily as a bus system, OC Transpo was able to tie large transit hubs into shopping center parking lots. There are also sidewalks located along most of the system and most of the streets feeding to where the stops are located. The system covers a lot of ground – including most of the metro area (similar in size to Birmingham’s).

I don’t know if we’d be able to truly enjoy a case of building it and then people coming. The pieces have to be moving in tandem to show folks that the focus is genuine and sincere – and one that will take government and the private sector to happen. Maybe then we’d also be able to get more jobs located closer to where the workforce lives, thereby reducing that distance to travel).

It would be great to see the streets of Birmingham, AL enjoy a scene similar to the one enjoyed by visitors to the West Coast currently – someday.

NOTE: This post was a result of one written for my personal blog, Dre’s Ramblings, on July 12, 2011.