I returned a couple of weeks ago from a trip that most folks who consider themselves urbanists would envy – two weeks traveling between Boston, New York City and Chicago. I mention it at the beginning of this post as it is influencing how I’m looking at things right now – including things I’d like to see happen. One of those things happened on October 22 at Birmingham’s citywide visioning session – part of its comprehensive plan process – and it was good. 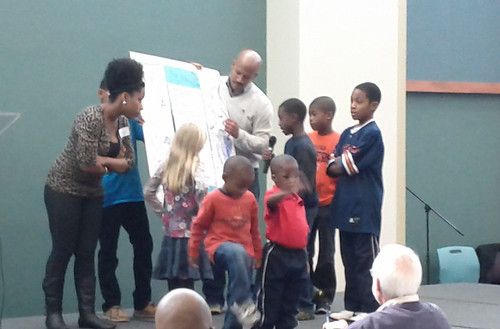 Close to 250 people gathered at the Birmingham CrossPlex to add their voice to what organizers hope will be a collective vision for Alabama’s largest city. Goody Clancy is serving as lead consultant for the city as they attempt to craft its first comprehensive plan since 1961. Among those in attendance were a group of young people who lucked into finding some adults wanting to hear their thoughts about the future of their city.

Some gathered for the half-day session may have found some of their suggestions a little over the top (their wanting more kid-friendly malls, more arcades immediately come to mind), but their voices also carried hope for things adults may find more helpful in making the city all that it can be…

They asked if they could get more libraries and better schools. Those unsure of whether or not the construction of the CrossPlex and its swimming pools were really wanted by area youth needed to only hear their first recommendation – they want more.

They hoped for another Railroad Park – perhaps a pre-cursor to the idea that the city’s existing green space (and the ability to find out what is currently available easily) may need a refreshing.

More importantly than any suggestion that was voiced or drawn by that group – the fact their words were listened to by those in attendance – seriously.

It’s important to make sure that your established leaders get their say. Listening to the young professionals in the crowd is also important as it’s becoming glaringly obvious that they are becoming an important part in the renaissance of many global cities. All of that said, we need to do a better job of engaging those we normally want to see play but not hear from as it is their city we’re borrowing for but a moment.

They also seem to not have the baggage of boundaries or disappointment that the adults bring to the table at times. They aren’t afraid to dream & to do what’s necessary to make sure it happens.

This was the first opportunity for public input into the plan, but definitely not the last. As the process continues, I’m hoping other children attend and that their suggestions are recorded and considered as seriously as those being made “for their own good.”

Anyone have any good ideas for how to get the voices of children involved (and how to best collect their suggestions)?

NOTE: I’m one of the members of the 38-person steering committee for the comp plan.