Home Best practices What an egg can teach you about hashtags 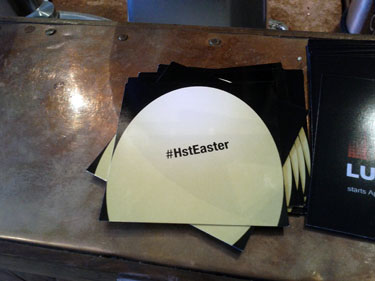 I brought up hashtags during my full-length session and my crash course session on Twitter (link forthcoming) at this year’s National Trust Main Streets Conference in Baltimore a couple of weeks ago. While they saw their initial use regulated to IRC forums, they’ve become an important part of the public discourse – helping folks on social networks like Twitter and Google+ filter through the fire hose to find the good stuff being shared.

Besides the general inquiries about what a hashtag is and how are they helpful, one thing that folks were concerned about was how to get the word out about one’s existence.

Luckily, I stumbled across this card on the counter at SOVA in DC later on that week.

Granted, it’s a lot easier to share the hashtag #HstEaster and get folks wondering about it when it’s painted on a 7′ tall egg, but I think some of you will get the point. People sometimes think that the only way to get the word out about what’s going on with you online is by talking to folks online. That works, but I’d be willing to bet there are many who still stumble across those postcards or business cards laid out at restaurants and office waiting rooms, gleaning important data off of them. When you generate enough buzz, it may even lead to some television coverage.

If you’re going to be a person, city or business that embraces a social approach to connecting, you’ve got to be willing to connect regardless of platform. You’ve also got to be willing to let go of some (if not most) of the control of the hashtag. It’s probably the biggest problem most big brands seem to be facing right now – they tie hashtags to television shows, movies and the like but get upset when the conversation goes in directions they didn’t consider. A community will let you know if they embrace a hashtag or not; they’ll also police it for you if someone tries to come in a co-opt it.

Publicize offline. Considering I was a visitor to the city, I wouldn’t have known to look for the hashtag without being prompted by the card. I still ended up not fully comprehending what it was until after the fact; while folks were singing karaoke on H Street, I was watching The Muppets at my friend’s house. There were still folks who were compelled to share videos of the singing as well as dancing while publicizing it outside of the usual suspects. They probably figured out who they wanted to target up front and then determined the best way to engage those not already aware of their existence.

Involve supporters. It was amazing to see how many businesses actually had the cards publicizing the egg and the associated activities along H Street. Considering the gateway status the street enjoys thanks to being adjacent to Union Station and the Baltimore-Washington Parkway, it would no doubt be able to attract outsiders (or at least have a greater chance to be able to do so).

Have fun. We are talking about this because it involved a 7′ tall egg that was decorated by area children and accompanied by karaoke after all. There was probably some infrastructure supporting this effort, but it allowed the conversation to happen without trying to control it too much. Sometimes you can schedule your way into obscurity; make sure there’s some flexibility in that plan you’ve developed to achieve the goal of the strategy.

Capital City Church in DC took what some would consider an unconventional approach towards engaging the larger community. It can just as easily be applied to things like street festivals (as executed flawlessly here in Birmingham by efforts like Paint The Town Red – #pttrbham) and social movements (including #hb56 and #crisisAL).

What did I forget? What else would you offer as advice when using hashtags as part of your digital media plan?