Home Tools An option for bulk-exporting images from WordPress.com 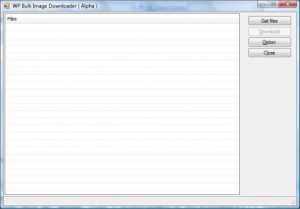 It’s been nearly five years since I moved my personal blog, Dre’s Ramblings, over to a self-hosted WordPress install. It’s been a lot of fun, though there’s one thing I’ve never been able to do – move all of the photos over to the server.

While I’ve discovered that currently you might be able to move the images over via the WordPress export functionality, it didn’t work that way when I made the transition. It was the second time I’d attempted to move the site; the first time I’d switched from Blogger to WordPress.com. I don’t necessarily enjoy the traffic that came from being part of the WordPress.com online community (and the Birmingham Combloggerator, but that could be changing soon – heh), but it’s still nice to have a place where I can not follow any of the “rules” associated with maintaining a good site.

I was realizing though that I wanted people to have a better chance of discovering my older posts while keeping them on the new solution. I’ve also been thinking about using the WordPress.com site as more of a Tumblr-type site. It’s also become apparent that as much as I don’t want to do it, I’ve got to consider monetizing the site as yet another revenue stream for me as I continue to pursue this career path.

A quick look online shows you just how hard it can be to do what could be viewed as a simple task. I had found a solution a couple of years back and decided it may still be the best option.

The WP Bulk Image Downloader, created by Michael Sync, is a rather simple program, but one that does some heavy lifting for those seeking to make the switch to a self-hosted solution after several years. It was built by someone who’d followed a similar path to creating his own web presence. It does act as though it’s not responding while it’s accessing all of those images, but if you’re patient enough, it downloads all of them to your computer and into the downloaded images folder created by the program during installation.

Moving the images over to your server depends on how you accessed the images. The program will pull down those images hosted on Flickr as well as those uploaded to your blog’s backend. The cool thing is that those images that were uploaded are placed in a similar folder structure as the self-hosted edition. This means you may be able to simply copy the images into the appropriate wp-content folder and simply change the target URL in the individual posts. This is also why you don’t want to delete your WordPress.com blog before you finish making sure your images are properly moved over to the new site.

The solution’s been around for at least four years now, but it seems as though it’s not one people appear to be comfortable with. I’d probably install the file onto a portable drive and run it from there so the login information isn’t as easy to access long term if security remained an issue.

I do know how I’m spending part of next weekend now. Hopefully this’ll help a few of you not be as stressed out when you’re thinking about making that move.