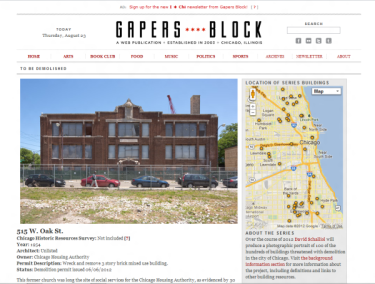 One of the benefits of working at The Eliza Thompson House for the better part of four years was the ability to pick Steve Day’s brain. Steve’s wife, Carol, bought the inn after he’d retired from serving as an executive vice president for Caterpillar. I think back to that time as the next best thing to an MBA I’ve had access to in life, available most evenings over take out.

Among the many lessons that have stayed with me over the years is the notion of the dumpster test. I still find myself using it as a great first step in determining exactly how and where a city is working hardest to move forward. The idea is simple – the more dumpsters you see out along the street, the more investments are being made in the community. It’s not civic improvements though, it’s those that can be acted upon by the private sector.

Sometimes the city’s just a little too spread out to truly keep track of what’s going on. This is when you hope you’re able to conduct a modern version of that test – one that’s been made a little easier thanks to tools like Google Fusion Tables and projects like EveryBlock. Birmingham’s design review committee process lends itself to a project that allows those interested to keep track of what’s being worked on around them and potentially introduce areas of opportunity to those interested in investing in the future of the city.

The committee normally meets twice a month and their agenda is made available to those who request it in advance. They’ve seen their decisions, while actually advisory in nature, watched with increased interest as the city makes efforts to reinvent itself in the 21st century. Most of the general public don’t necessarily understand what their role is or why their discerning eye is necessary (though recent efforts have been made to demystify it).

Imagine what happens if you find a way to share the list in a more interactive way? A map could display where the property is located. Placing a cursor over or tapping on a point on the map would enable you to see before and after images and learn a little more about the community (perhaps linking to a BhamWiki article where appropriate). They’d be able to see where it was in relation to where they lived and what impact it would have on the community. It probably makes it easier to explain just how the project fits into the surrounding neighborhood.

It’s not like there aren’t already projects tackling this concept. The folks at Gapers Block in Chicago secured funding to do a series called “To Be Demolished” this year. It gives visitors to the site a look at 100 of the hundreds of buildings threatened with demolition in the city photographically. The about page provides definitions and links to additional resources useful in attempts to save some of them while also educating visitors on the various processes in the city.

The only way a city is going to be able to start to fix its problems are if it’s aware of what they are and of how they can be fixed. This modern version of Mr. Day’s dumpster test starts to make you aware of the changes happening around you and their short-term and long-term impact. It provides journalists with a place to start in terms of issues and citizens an avenue to become more engaged. Hopefully we’ll see more of it happen as we attempt to move cities forward.