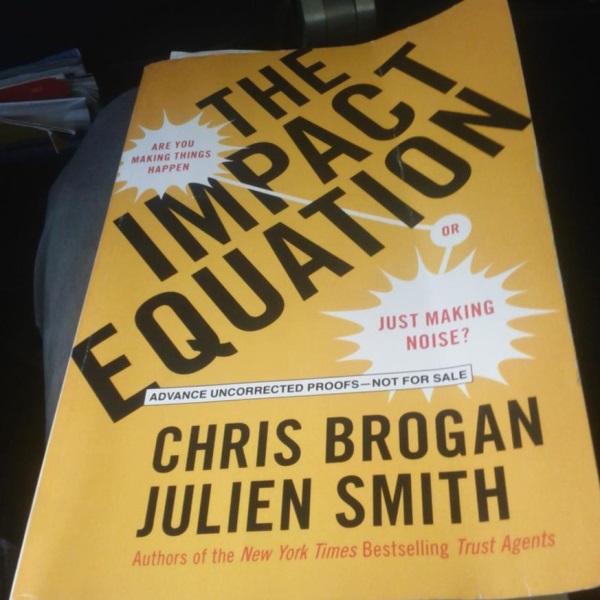 The book arrived only a few days before I was hopping on a jet plane for a two-week trip back in mid-September.* I wasn’t expecting the chance to review The Impact Equation: Are You Making Things Happen or Just Making Noise?

(affiliate link) since I signed up later than most. I’ve read it through – twice, with highlights throughout – and think it’s one of the best books on strategy I’ve read in recent years. It’s also why it’s taken a little longer to write this piece than originally planned.

It is the latest print collaboration between Chris Brogan and Julien Smith. For those who read their first one, Trust Agents

, it’s a deeper look at some of the things that should be worked on as you attempt to earn trust from others in addition to other concepts like contrast, reach, exposure, articulation, and echo.

It’s important to note that they don’t intend for this to be a book about social media and online communication – and it’s not (at least not primarily). It’s a piece that does a great job reminding us we still need to be human. It also points out how some of those “offline” habits are still essential no matter where you’re planning to set up your platform to do business.

If nothing else it serves as a reminder that trust comes from making things happen, not sitting on the sidelines. You’re not told how to reinvent the wheel – you’re reminded that we’ve known how to move the needle forever and that while the tools have changed, the basic steps really haven’t (and that’s a good thing). The book isn’t something you can breeze through if you want to benefit from its reminders and lessons; it’s one that warrants stopping every once in a while and letting their equation start to influence how you do things.

In other words – the book serves as proof of concept.

Chris and Julien are able to connect with readers through storytelling and humor while we let their advice and nuggets of wisdom wash over us. The point of the book isn’t to do what they’ve done, but to take their guiding principles (and the examples of how others like Richard Branson,  the folks behind Instagram, and  others) and see what you can do to make positive changes to your journey. It’s probably why I took my time with it. Rushing through it in order to get it out “on time” would have meant me missing a lot of useful stuff.

It’s got me trying to work through how to find a community more interested in knowing what’s going on and why it matters than about whether their source of information broke the story and by how many seconds. I’m wondering if I should be changing the shape of my ideas to be more deliberate and useful in order to earn trust. It’s less about being louder than it is about being smarter about how you reach out to others, including if you’re reaching out to the right folks in the first place.

Should you buy it?

If you’re willing to stretch your mind and not have someone tell you exactly how to create an impact, The Impact Equation

may be just what you’re looking for in a guidebook to navigating this new entrepreneurial world.

Of course, that’s just my opinion. If you want to see what some others have thought about the book, you can check out the #impacteq hashtag on Twitter, similar results via Google+, and what’s showing up as core concepts captured visually on Tumblr.

*FYI – I did get an advance, uncorrected proof of the book to review back in September thanks to this tweet (the link included within is no longer active). I still haven’t done an image yet…