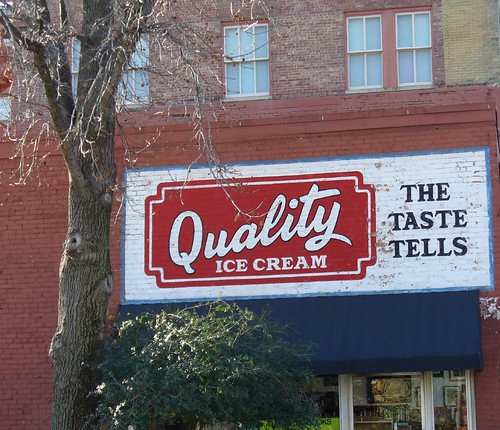 Sometimes it takes a while to connect the dots, especially if you’ve been trying to do so on several occasions using the same information for many years. This is one of those cases.

I posted a question across several social networks late Tuesday evening (and a few more this morning with much less success) just to see what kind of response I’d get:

How would you go about engaging the human spirit to respond in a positive way?

It garnered a range of answers, some along the lines of what I expected:

I’m still waiting to see what other types of answers I might receive after this post is published. The question comes out of one of the first meetings I ever had back in 2007 about a community news website I wanted to launch here in Birmingham. It’s recently become a compass with which to determine how to approach any project – a new manifesto if you will.

I met with Dick Pigford, a partner at ArchitectureWorks, on a Sunday afternoon that February. The mere fact he took time out of his weekend to meet has always meant a lot to me.  The firm is housed in the former Birmingham Publishing Company headquarters building on the city’s Southside. It’s seeing a great deal of activity  one currently enjoying the buzz going on nearby as development continues to emerge as a result of Railroad Park and the soon to be completed home of the Birmingham Barons, Regions Field.

The two projects I just mentioned are at the heart of that question and what it means. These things were all dreams back in 2007. Since then these dreams have been acted upon with the highest standards possible. 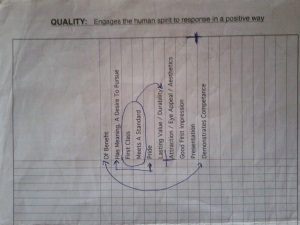 Early on during the meeting, Dick got up and walked away for a moment, bringing back two pages from the printer. What he handed me were notes from a visioning session done with residents in Ensley, one of the neighborhoods I worked in at the time. The top of the sheet had what’s now become my definition for the word quality, and the source of the question. It’s something I see in projects, both built and digital, helping them stand out and feed the need for more to be done.

I’m thinking I may have asked the wrong question yesterday, so I’ll try again:

What does engaging the human spirit to respond in a positive way mean to you?

It’s a loaded question any way you look at it. It also makes a great deal of sense as you think about it. I’ve found few, if any, who’d not consider Railroad Park a quality project. Those in Ensley sought a quality building for their teenagers to learn – the result was the new Jackson-Olin High School in 2006. It does, as one definition suggests, denote an essential character or nature. It can lead to a distinguishing style.

We tend to throw words around now without really thinking about them. Quality is one we still manage to protect from this increasingly bad habit. It seems to inspire. It’s easier to support than a mailed-in performance or something unveiled before all the parts are ready for prime time.

What helps you create a quality product? This is the list of attributes included in those notes six years ago (especially since you probably can’t read the image above):

I’m going to attempt to tackle what these entail in upcoming posts, but are there other attributes missing? Do we need all of these (or any of them) for something to be of quality? Any answers to that reworked version of the question?

We’ll see what happens as we dig a little deeper…