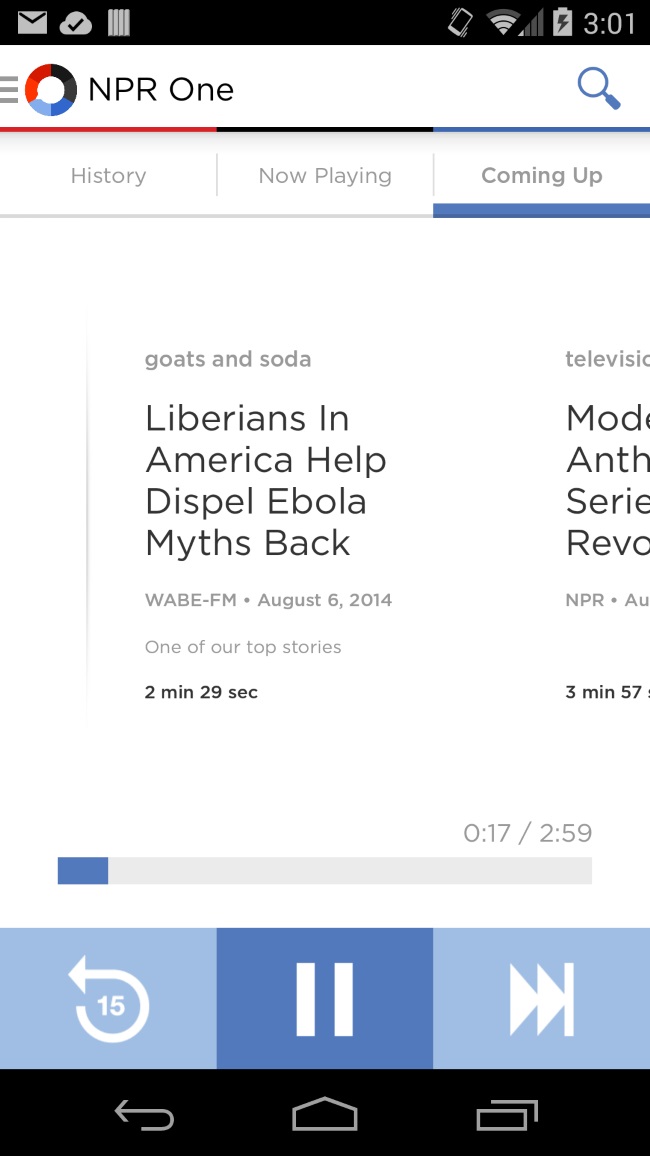 The first time I got to play with NPR One, it was called the NPR Infinite Player, and it was shortly after it launched in November 2011. I’d already tried the original NPR extension for Chrome back in 2009 and the original NPR for Chrome app in late 2010 (even though they didn’t want us to call it that back then).

The evolution from that first version and the one getting all the praise currently has been extensive. NPR for Chrome users were originally invited to browse through four categories on their own, meaning constant attention needed to be given to what was playing (though a playlist could be built out in advance so you didn’t always have to visit the open tab). It was available in Chrome and Firefox, providing flexibility but limiting the possibility of stumbling across something new to you to when you were in front of your desktop or laptop.

I liked being able to browse and choose what I wanted to hear. The ability to search everything meant I’d be more likely to try to listen to something I wasn’t seeking. That said, I’m also a fan of just pushing a button and letting it play. I love my NPR News app,but I’m not as likely to seek out new voices using it, as VentureBeat points out in its review. 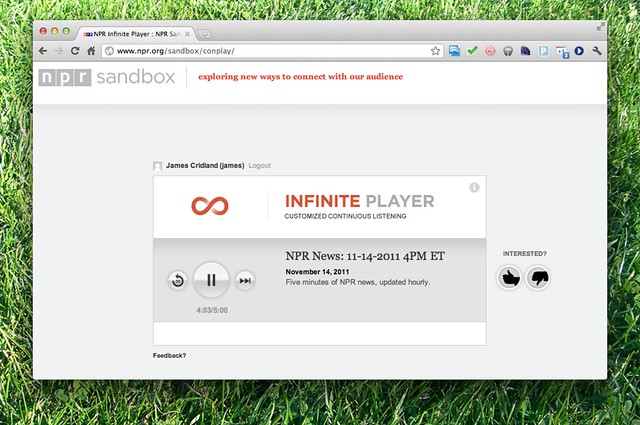 Thanks to James Cridland for the screenshot (via Flickr).

NPR One has received most of its praise because it does help you see more of what you’ve been missing. It’s a more manageable tool too — and one available as a smartphone app on both iOS and Android devices. I’ve enjoyed its simplicity; you can look back at your history, see what’s playing, and see what’s coming up next. Toggling a funky looking light bulb lets the secret sauce behind the app know what the listener enjoys more, allowing it to become a unique, curated experience.  You can pause a piece, go back 15 seconds, or skip to the next one in the queue. If you tap on the app’s logo in the upper right corner, one of the options available uses the same aforementioned icon to let you know of additional stories that may be of interest to you based on your tags.  It lets you offer feedback on ways to make the service better and can even provide you with information via email about how you can donate to your local NPR station. I’m having issues logging into the service on the laptop, but it looks as though it would work as the phone app does (though missing some of the options previously available via the Infinite Player).

While it means you just get to keep listening and letting NPR find stories for you, I’d argue it also means it may also encourage folks to visit their main website more often to see what you might be missing. You may not hear shows familiar to you, but I think that’s important. I’m not sure if you ever see this version of the app get rolled into the “traditional” one, but I’d be shocked if local stations and the folks at NPR headquarters in DC don’t pay a lot of attention to what segments are tagged interesting — and where those tags are coming from — as it continues to evolve. Kelly McBride over at the Poynter Institute expands on that last point about two-thirds of the way through in her initial review. I’m looking forward to seeing if and how my local station takes advantage of it moving forward. I agree that local affiliates probably benefit most from the app if they choose to upload content; I’m not  sure there’s a need for independently produced shows, like This American Life, to be available yet (though it could be helpful to serve as a distribution tool later).

The app lends itself to a growing movement of exploration. I like that word more than discovery just because it’s a better description of what we’re doing — we’re finding things that may have been there for a while instead of stumbling across a new product. I keep wondering what would happen if platforms like YouTube adopted this (Vimeo already has to a certain degree with Couch Mode).

NPR One’s future success may depend on whether people are willing to allow for that stumbling to occur or if they’d rather continue to wait for it to be done for them.